When you look at the history of the McKinney Public Library, one thing is immediately clear: Without the support of the McKinney community, we wouldn't be here today. McKinney residents came together to create the library and sustained it through generous contributions over the years. Today, because of their continued support, we are able to offer a wide range of services that keep our community connected. We hope you'll enjoy this brief history of the library as a celebration of our biggest supporters, the McKinney residents. 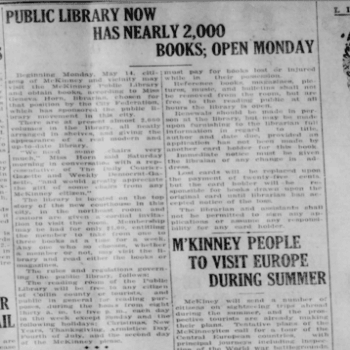 The library began as a subscription library in 1928 thanks in part to the efforts of the City Federation of Women's Clubs. For much of its history, the library was dependent upon the generosity of McKinney residents to keep its doors open; they paid membership fees, donated books and materials, and in one case, a house!

By 1951, the library was struggling financially. As long-time supporters concerned for its future, The City Federation of Women's Clubs approached the City of McKinney for support and the city agreed. The library was placed under the guidance of a new Library Board and began to expand.

The first branch library opened in 1954 at the E.S. Doty Colored School of McKinney. The collection contained 383 volumes for adults, 51 for teenagers and 151 for children. 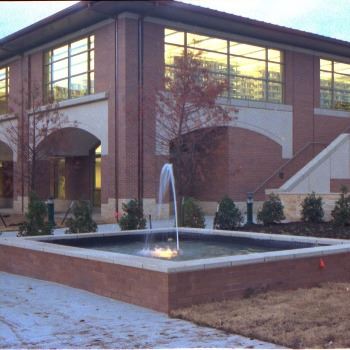 Between 1967 and 2002 the library moved three times within the downtown McKinney area. At the time of each move, McKinney residents showed their support for the library by approving bonds and donating land. The 2002 move brought the library to its current location, 101 E. Hunt St.

With the phenomenal growth of McKinney in the early 2000s, McKinney residents voted to approve the construction of a second library on the west side of town. With the construction, City Council created the McKinney Public Library System as the umbrella beneath which both branches operated. The branch location in downtown McKinney became the Roy & Helen Hall Library while the branch location on the west side became the John & Judy Gay Library.

While the John & Judy Gay Library opened its doors at the end of 2009, it quickly outgrew its floorplan. As a result, McKinney residents voted to approve an expansion of the facility, effectively doubling its size. The newly expanded facility reopened in the summer of 2020, providing even more opportunities for the community to connect with each other and the world around them.

Today, the McKinney Public Library continues to grow and evolve in order to provide the best services possible to the community. Come and stop by the library; make discoveries, learn something new, and have fun!

Check out our photo gallery to see newspaper clippings and images of the Library through the years.

The Gays have a long history of public service to the McKinney community. John Gay was a local attorney, served as a Council Member from 1985-91 and Mayor of McKinney from 1991-97. Judy Gay was an English teacher at McKinney High School from 1979-86 and served on the Library Board.

On December 10, 2009 the library branch at 6861 Eldorado was named in honor of the Gays and their strong support of McKinney and the library. In 2020, the Gays donated a bronze statue of two playful children to enhance the outdoor recreational space at the library.

The Halls had a deep commitment to McKinney, its history, its development and, most of all, its people.

In his early life, Roy Hall was a Captain in the Army and even served as a bodyguard for former President Theodore Roosevelt during World War I. After Roy left the Army, he and his wife, Helen, spent two years on the road visiting old battlefields in Texas, demonstrating the love they both had for history. Roy worked as a columnist for the McKinney Daily Courier-Gazette and the McKinney Examiner, and collected all the local history accounts he could find. He was a founding member of the Collin County Historical Committee and served as the Mayor of McKinney.

Helen Gibbard Hall served as a third-grade teacher at Fanny Finch Elementary School. After her retirement, she and Roy wrote a book on the history of Collin County. After Roy's death in 1970, Helen continued to research local history and wrote two more books. She served as a founding member of the Heritage Guild of Collin County, which oversees the Chestnut Square Historic Village. She also played an integral role in creating the former Collin County History Museum, now called the North Texas History Center.

After the death of their father, Joseph Dulaney and his sisters were raised by their mother, Lucy, in McKinney on Chestnut Street. Although he trained as a pharmacist, Joseph devoted himself to property management and investment when oil was discovered on properties the family held mineral rights to in Jack County and Young County.

Joseph donated land to the McKinney Public Library in 1967 so they could build a new facility in honor of his mother, Lucy Field Dulaney. He also donated a portrait of Lucy that still hangs in the Dulaney Room of the Roy & Helen Hall Library.